For youth with psychiatric service needs; serious mental illness in children and youth

MST-Psych is an adaptation of MST that primarily targets youth between the ages of 9 and 17, at risk of out-of-home placement due to serious behavioral problems and co-occurring mental health symptoms (such as thought disorder, bipolar affective disorder, depression, anxiety, impulsivity and substance use/abuse). MST-Psych incorporates evidenced-based interventions for youth substance use disorders and is designed to help youths avoid placement in juvenile justice and/or mental health treatment facilities.  MST-Psych prevents or reduces severe aggressive behavioral, emotional, and psychiatric issues in children.  Over a period of four to six months, MST-Psych is delivered in homes, neighborhoods, schools communities by master's level .

Therapist FTE per team: 3 to 4

Caseload range per therapist: 3 to 4

Length of stay range: 4 to 6 months 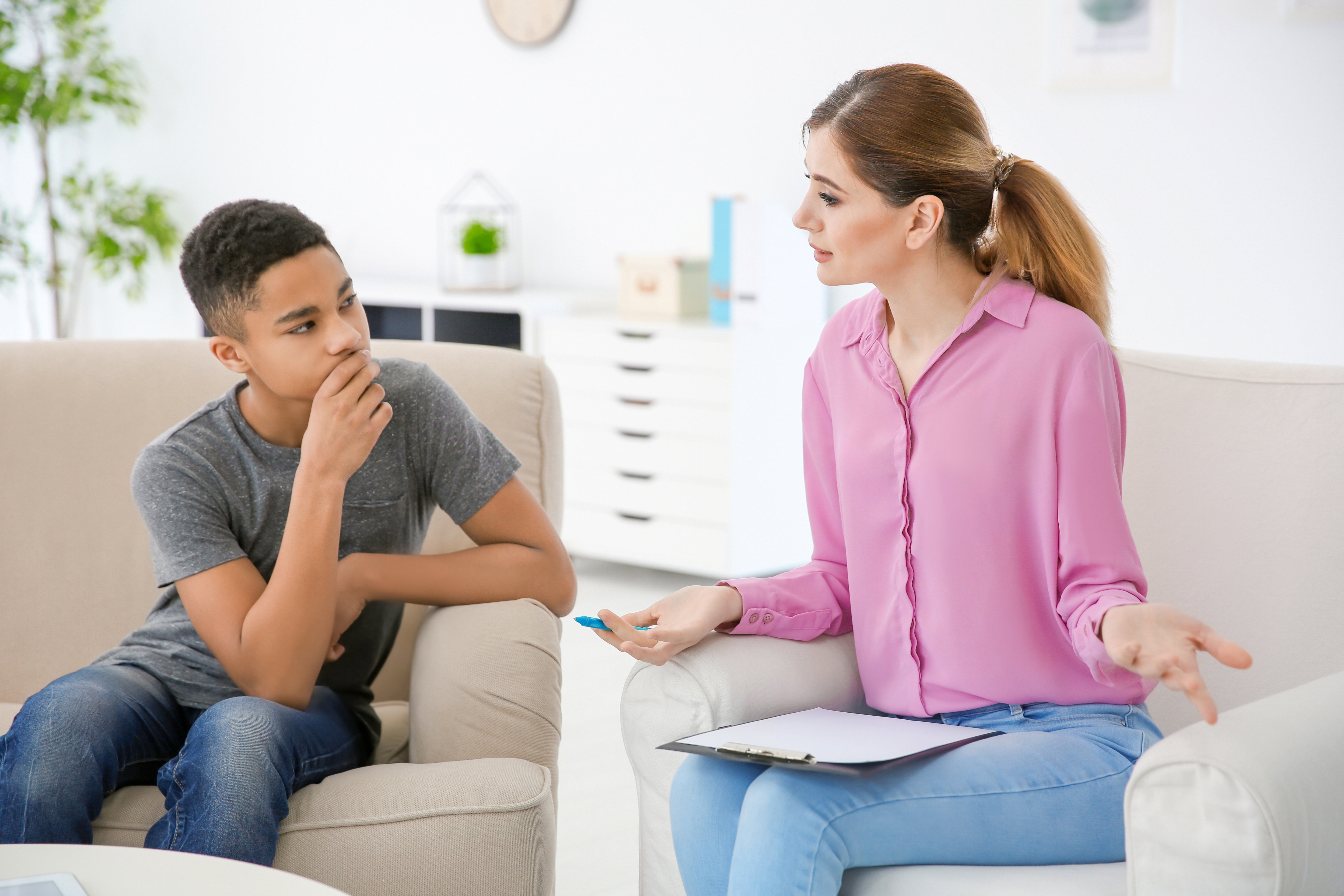 The following is a story about an MST-Psych case, written by Melisa Rowland, MD.

Jamie Smith* was worried. Something was wrong with her son. She had suspected a problem for several years, but now there was no denying it—Ryan was ill. It was his mind. Jamie first noticed symptoms three years earlier, around Ryan’s 14th birthday. At that time, he was having trouble sleeping and would wander the halls of their apartment late at night, talking to himself. He stopped cleaning his room and often neglected his personal hygiene.

At first, Jamie chalked this up to stress. The family had recently moved. Ryan changed schools and was hanging out with a new group of kids. The mother could see these new friends were wild, unsupervised trouble. On top of which, Jamie was pretty certain they smoked marijuana. Ryan’s father, David, was convinced that his son’s odd behaviors were caused by drug use.

The parents searched for a way to help their son. Over the ensuing three years, the family sought help from his school, mental-health centers, substance-abuse counselors and emergency rooms. They went to the ER eight times. Five of those visits landed Ryan in a psychiatric hospital due to violent outbursts and paranoid behavior. Each time he was placed, the doctors and staff diagnosed him with substance-induced psychosis and sent him home after clearing his system of drugs. Unfortunately, Ryan would soon relapse.

During one of Ryan’s hospital stays, two of his friends were arrested for burglary. That was the tipping point for Jamie and David. Exhausted and desperate for help, they reached out to the New York City Administration for Children’s Services (ACS) Family Assessment Program Services (FAP). They asked their FAP intake-assessment worker to place their son out of the home under court order. The Smiths felt that they had hit rock bottom as parents. They didn’t want to give up on their but were afraid he might get arrested or harm someone. Filing a legal petition with ACS and the family court was pretty much a last-ditch effort.

It is not uncommon for youth like Ryan, with mental illness, to become entangled in the justice system.

is evidence1 that youth with mental health problems are more likely to get arrested than peers of the same age without emotional disorders. Looking at the research, it is estimated that between 50 and 70 percent of youthful offenders have diagnosable behavioral-health disorders2compared to 9 to 13 percent in the general population.3

Despite the need for mental health services in the juvenile justice population, data from multiple sources suggests that juveniles are not receiving adequate or appropriate mental health and/or substance abuse treatment services when placed in any type of juvenile facility.4

Indeed, shunting youth into the justice system likely exacerbates their underlying mental health problems. In these facilities, youth are often exposed to violence, as well as physical, emotional and sexual abuse from residents and staff. Such exposure and victimization are not likely to improve their mental well-being. Add to that, incarceration isolates the young people from families and decreases the chances of good parental relationships. And once a youth is placed, the odds of recidivism are high; creating a revolving door of harmful intervention that makes it less likely mental health, substance use, and antisocial symptoms will be alleviated.5

No placement until evidence-based intervention tried

If the Smith family had lived in many other parts of the U.S., trying to get help for their son through the judicial system would likely have backfired and entangled him in judicial placements. This family, however, was fortunate as an array of evidence-based treatment options were available to help their son. New York City’s ACS has been providing research proven, family-based clinical interventions and services for youth experiencing serious behavioral, emotional and substance use disorders since its 2006 Juvenile Justice Initiative. These services are ecological in nature and designed to keep the youth in the community and the family together whenever possible. As a result, when Ryan’s family went to the ACS office to petition for his removal, they were told that they had to first try an evidence-based intervention. Ryan was initially placed on an MST team specializing in substance abuse treatments, yet due to the severity of his mental health problems he was quickly re-assigned to an MST-Psychiatric team.

MST-Psychiatric is an adaptation of MST specifically designed to serve families with youth exhibiting serious mental health, substance abuse, and behavioral problems. The effectiveness of MST-Psychiatric has been demonstrated in two published randomized clinical trials and several unpublished randomized trials and quasi-experimental studies. Research supports the therapeutic effectiveness of this intervention in reducing youth internalizing and externalizing behaviors, improving family functioning and increasing the time youth are able to live at home.

The Smith family benefited greatly from the integration of a child and adolescent psychiatrist into the MST-Psychiatric team and the additional training provided to therapists and supervisors to assist with the assessment and treatment of mental health problems in youth and their caregivers. In Ryan's case, the team gathered evidence that helped the psychiatrist rule out substance-induced psychosis and helped the family engage with interventions targeting a primary thought disorder. With proper treatment, Ryan's symptom's stabilized. He stopped talking to himself and slept better. The team also worked with the family to cut off Ryan's access to drugs, reduce his association with anti-social friends and increase his pro-social activities to reduce his substance use. Ryan’s school was integrally involved with the team in both assessing and treating Ryan. Ryan’s school placement is now stabilized and he has made big gains at school behaviorally, and small gains academically. Stay tuned for future blogs about MST-Psychiatric.

*Names have been changed to protect confidentiality.

At MST Services, we offer comprehensive assistance with the full development of your MST-Psych program by providing program start-up assistance, initial and on-going clinical training and program quality assurance support services. Administratively, our relationship would be structured as a license agreement for MST-Psych between the Medical University of South Carolina (MUSC) and your organization. We, MST Services, are the MUSC-affiliated organization that grants these license agreements and provides program development and training services in MST and MST-Psych throughout the United States and internationally.

MST Services program development and support of a comprehensive package of services designed to do “whatever it takes” to ensure that your MST-Psych program will be successful and sustainable. These services fall into four areas: program start-up including initial staff training, ongoing clinical support activities, ongoing organization support activities, and quality assurance support.

To view a more detailed description of MST-Psych,  click here.

Interested in starting an MST-Psych program in your area?
Fill out the form below and someone will contact you shortly.